Rock Band was a moment in gaming history that I’ll never forget. As one of my favorite games to play offline and online coop with friends, Rock Band (and Guitar Hero for that matter) were a daily part of my stress relief routine at one point. Personal playlists of songs that I’d wail away on the guitar would repeatedly be played, much to my family’s discontent as Foo Fighters, Metallica, Silversun Pickups, and Queen would blast through my speakers! Of course, let’s not forget the annoying repetitive tapping of the Rock Band drum set pads as well!

Often when gamers have a title or series that they love, they pour over the little details and modes in hopes of finding something to improve upon. As we play other games, we’ll also see how well modes and features work and wonder how they would work in our favorite games. Sometimes sequels will be that moment of hope that our fav games will reach perfection. Other times we are left with watching other titles perfect the features that our fav games poorly executed. Regardless, our favs remain in our hearts and dreams as we wait for that offering of perfection we always crave and rarely receive.

Today’s dream takes us back to those days of guitar and drum controllers. When we all argued over whether Rock Band or Guitar Hero was better and when our favorite songs would be added. If that golden age of rhythm games could continue, how would it evolve? Lucky for you, I’ve thought long and hard!

Let’s face it. The core gameplay of Rock Band and Guitar Hero (essentially developed from the legendary GuitarFreaks series) was iconic. It provided a system that didn’t require you to be a trained musician and yet had enough levels of ‘skill’ to separate the good from the bad.

Personally, I wouldn’t want to change anything. Let’s not add any more buttons or colors or WHATEVER to keep things simple and accessible for today’s generation to enjoy what we did not that long ago.

If I did want anything to change, it would simply be to merge the colorful note column style of most rhythm games and tack on the ‘learners mode’ to allow for usage of real guitars and instruments. Ubisoft’s Rocksmith doesn’t really get enough credit or praise for its revolutionary system. As you play the song, it adds notes in its system to help you play the song in an almost visual style.

Essentially, let’s have a game that you can play for fun or ACTUALLY LEARN HOW TO PLAY FOR REAL! Gamification is such a powerful tool. The ability to place a scoring structure into how every note is played, whether on real or fake instruments, would really spice up online multiplayer AND STREAMING (we’ll expand on that later)!

Rock Band’s career mode was a modest attempt to lead the player from the easy songs to difficult songs. You would strum and tap thru progressively harder playlists meant to get you to explore different pieces you didn’t hear of or never technically appreciated. Even the later developed Rock Band Rivals sought to create your ‘Rockudrama’ in a style that would be appealing. 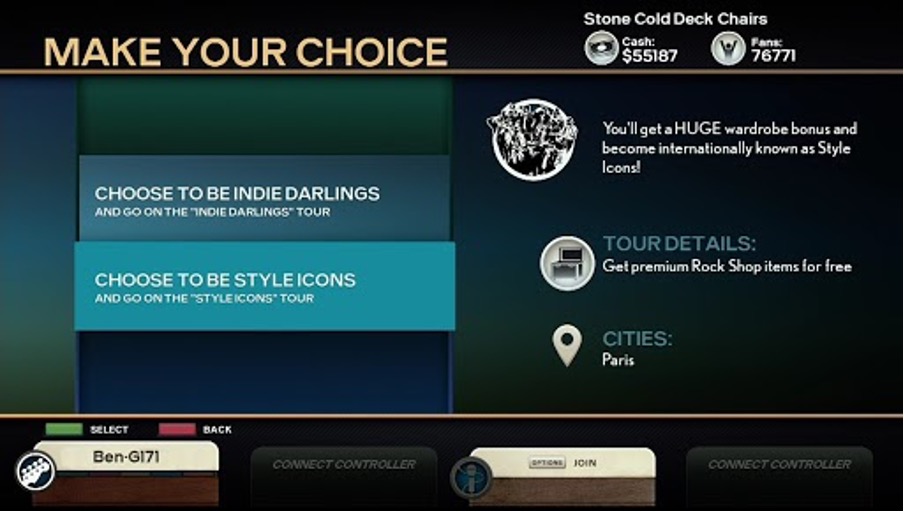 While those modes were nice, they didn’t really feel like they had that much replayability. Choices could be made to affect how virtual fans would react to specific playlists and such, but outside of that, meh.

In steps, the indie gem is called Rock God Tycoon. Built as a music-biz tycoon simulator, you manage a rock band from their humble beginnings. You hire bandmates with skills that cover songwriting ability, technical ability on their instrument, and a couple of others. I’m confident that you could add: 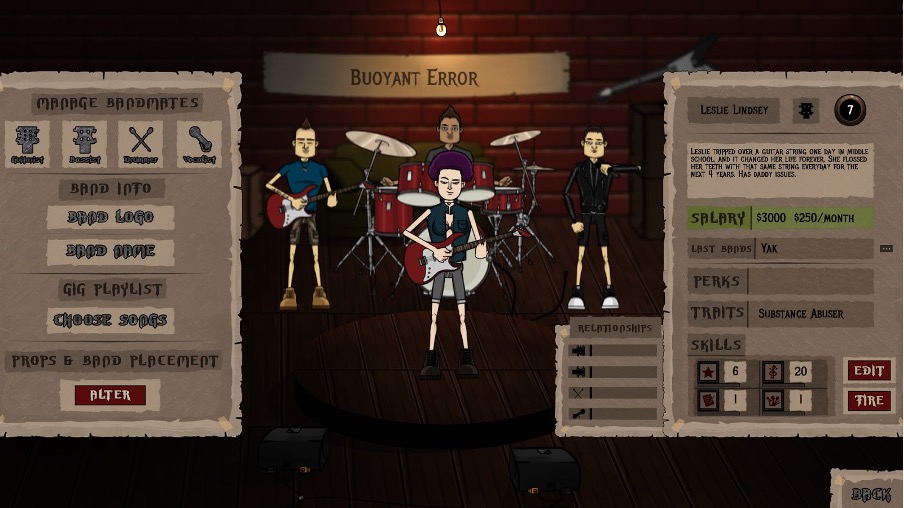 This game did a superb job of setting up a way to create songs (without actually doing so) and then using them to have a kind of RPG within the game. You would build EPs and albums out of these songs. The popularity and potential of each piece would be based upon your studio performance when it was first recorded.

Without digging into Rock God Tycoon’s full gameplay, the gameplay’s style was easily an instant draw to what the career mode of Rock Band could have been. With events, various contract types, tours, generated record sales, and so forth, the replayability was very high. Weave all of that into what Rock Band already had, and you potentially have a system that keeps fans coming back whether you have new songs (created or from real-life groups) or not.

Ok, just seeing that subtitle probably gave you the gasface, right? How in the world would Middle Earth: Shadow of War and Rock Band ever be able to merge in any intriguing way?

Simply put, I’m a big fan of the Nemesis System. This procedurally generated system allows the game to make foes that you defeat (and even those that defeat you) remember and return to affect your story and game later on. As foes defeat you, they get stronger (where the game changes the foe’s strengths, weaknesses, and stats). Later on, you may encounter this same foe, and they will remember you! They then speak to you about your last encounter before proceeding to try to murder you again! While killing each other isn’t how Rock Band could use this system, it could be an interesting way to affect your custom band's story. Either way, the system provides a lot of replayability to the game.

In Rock Band, this system could be applied to provide you with AI rival bands or AI bandmates with tons of different perks, skills, and gear to make in-game events more enjoyable. They may even make the gameplay more interesting!

You could have bandmates that randomly begin playing solos in the middle of songs, jump into covering another song altogether, or simply don’t show up, causing some of your notes not to show up or even change pace mid-performance!

The rival bands could cause different RPG decisions to be made where your band may have to play more ‘punk’ songs and less ‘metal’ to entice new fans. Maybe the rival band mimics your style, and you have to change the solos of all of your songs. I’m certain there are plenty of ways to have the skills and perks of rival bands affect the fans, scoring, and payouts of your performance in important ways.

You could even assign the system to locations. If you play poorly in one East Coast city, it could affect your popularity and payout in others on the East Coast in a negative way. You may also find it gives you more ‘underground’ cred despite it damaging your ‘mainstream’ cred. Maybe specific locations in one city could spring up (through procedural generation) that could really boost your record sales in an afterparty if you perform well (or poorly) enough. The songs you select (regardless of how well you play them) could define the results.

I’m sure all kinds of things could be programmed in to affect an album tour, an EP for a bandmate’s solo career, or an awards ceremony performance!

With a more robust career mode and embedding the importance of NPC bandmates’ skill level and perks, introducing a loot-based system would also spruce things up. Games like Fortnite and The Division have loot systems that are very robust and upgradable. The loot affects how your character looks and performs, which is always vital in games with customizable characters like Rock Band. 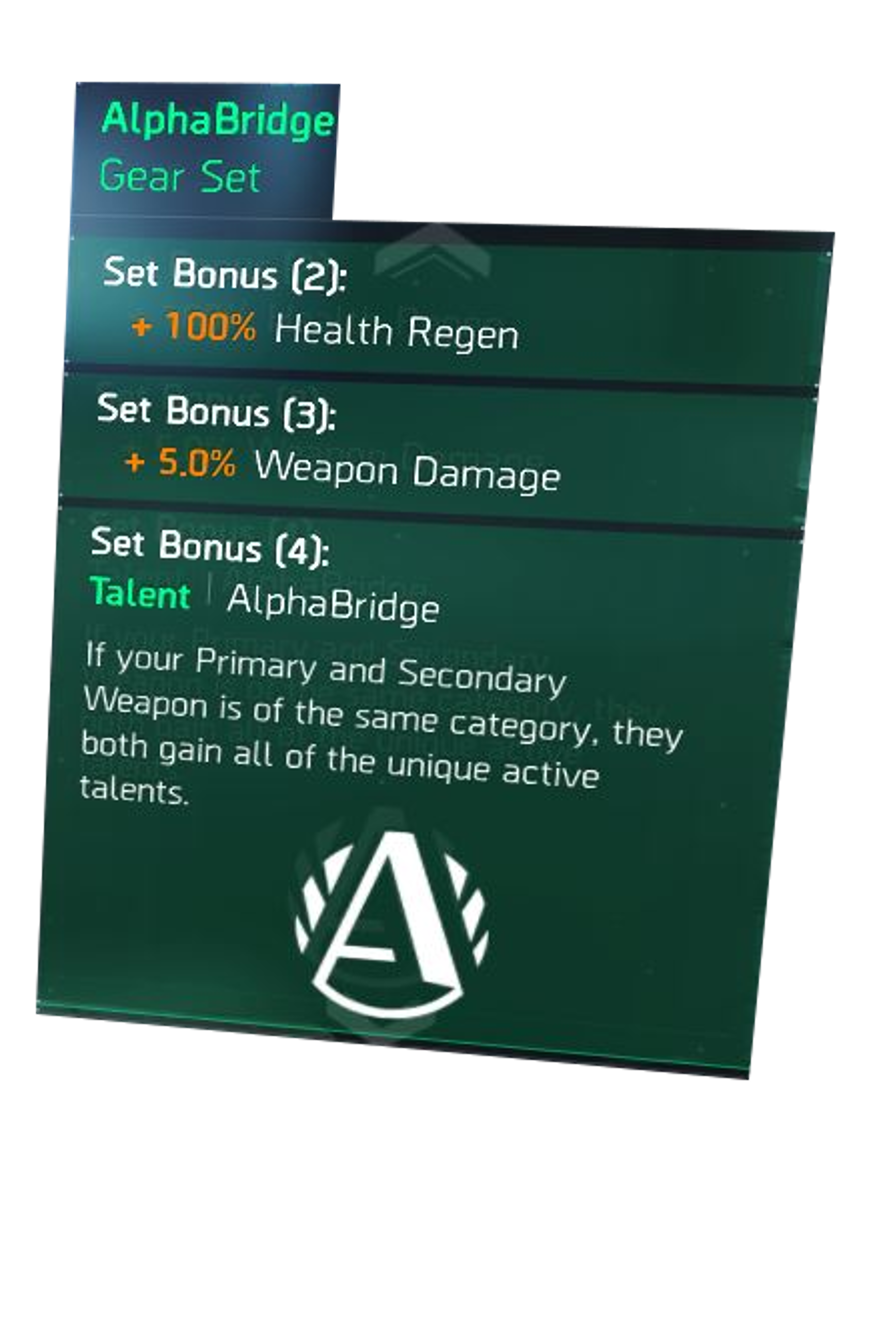 Originally the loot in Rock Band was purely so that the game characters would look cool as you played through your set. With a loot system like The Division, the gear could actually help or harm you in differing circumstances. Each piece of loot could help or harm the studio, stage, or practice performance in improving your character’s skills, perks, and/or performance payouts. Get a whole set of gear, and you can get a massive bonus of some sort to one or multiple categories of stats.

For example, collect a full set of Prince’s Purple Rain gear and get a massive boost to solo scoring and/or forgiveness as well as a showmanship stat boost. There are so many possibilities regarding visual styles, instrument styles, and gear (like speakers, microphones, studio equipment, etc) that could become part of this loot system and really change how the game is played and enjoyed.

As this dream ends, I’m confident that this imaginative trip has sparked an idea for your favorite game or even for Rock Band itself! Shoot us some comments and replies on what you’d wish to see or where you would take this title!